Q: What do the Sun and Moon curves mean?

Q: What are the labels on the Sun and Moon telling me?

Q: What is the % number next to the Moon Phase?

Q: What does “Magnitude” mean (for Moon events)?

Q: What’s with all the Twilights?

Have a question that isn’t answered here? Drop us a line at contact@digitalsundries.org.

What do the Sun and Moon curves mean?

The curve in Suntime represents the altitude, or height, of the Sun and Moon over time.

The heights of the Sun and Moon change throughout the year due to Earth’s elliptical orbit and tilted axis. Away from the equator, the Sun is highest in the summer, and lowest in the winter.

What are the labels on the Sun and Moon telling me?

The headings next to the Sun and Moon tell you where in the sky to look for each body.

Depending on your time and location, the Sun and Moon appear in different quadrants of the sky. In Suntime, you can display this as either as a compass heading, or azimuth in degrees.

What is the % number next to the Moon Phase?

Since these four phases are known, the percentage illumination is only displayed whenever the phase is something other than new, full, first or last quarter.

What does “Magnitude” mean (for Moon events)?

Apparent magnitude measures the brightness of an object (in this case the Moon) as observed from the Earth.

The lower the magnitude, the brighter the object: the Sun measures around -27, Full Moon around -13, and Venus at its brightest around -5.

What’s with all the Twilights?

Twilight happens twice each day. Suntime shows three subcategories of twilight defined by the Sun’s elevation compared to the horizon: Civil (closest to horizon), Nautical, and Astronomical (furthest from horizon). 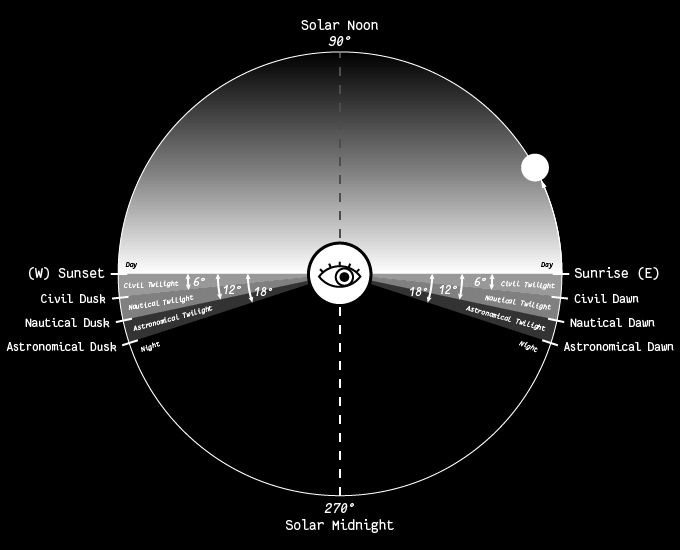 Crescent and gibbous phases under construction in Suntime!

As with twilights, magic hours happen in the morning and evening each day. In the morning, Blue Hour preceeds Golden Hour. In the evening, Golden Hour comes first.